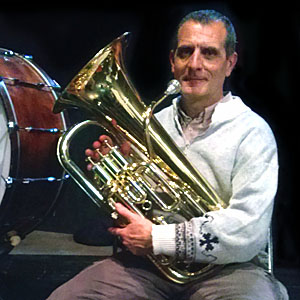 These days I play Euphonium with the Unió Musical del Bages and I have a better technique than when I started.

One day in April 2010 we were at the rehearsal room of the Unió Musical del Bages. We were playing a piece in which the euphonium has some solos. They are easy passages; they do not represent any technical difficulty; however, little by little, I realised that I was failing to produce some of the notes and that the sound of the long notes shook. The following week I studied the problematic passage at home and that's when I realised I really did have problems controlling the sound. I studied more than ever, but the problems, far from improving, only increased. In the next rehearsal I had to abandon the stage because I was unable to emit a controlled sound. In a matter of 3 weeks I went from normal playing to not being able to play at all. I was in a bewildering situation. I talked with my colleagues, with other musicians, and with some teachers, but they couldn’t fathom out where the problem lay.

I looked for information and, after a long search, I discovered that it could be dystonia and that there is a centre in Terrassa (the Institut de Fisiologia i Medicina de l'Art) who treat it. I got in touch with them in June and in September I started treatment. The first thing I discovered was that this dysfunction affects many musicians and that many factors, especially mental and psychological, are involved. At first, in my case, the treatment was demoralising because it took a long time before I see some improvements.

I just did not believe I could solve the problem. But one day I started to notice obvious improvements. In each of the control sessions I did in the centre I found something new.

After about two years, one day I found myself being able to achieve unthinkable things and realised that in all this time improvements had been accumulating which, from within, were difficult to notice. There comes a time when, without knowing why, you are playing as before. From there my progress was very fast. In a matter of a month I could already see myself being able to play properly again.

Today I am back playing again with the Unió Musical del Bages and I have a better technique than when started. I have gained self-confidence and this means that day by day, with study and effort, I can improve my level substantially. I am very grateful to Sílvia Fàbregas of the Institut de Fisiologia i Medicina de l’Art-Terrassa for having helped me to solve my problem, especially during times when I did not believe that it could be solved.